How do Comets Move? 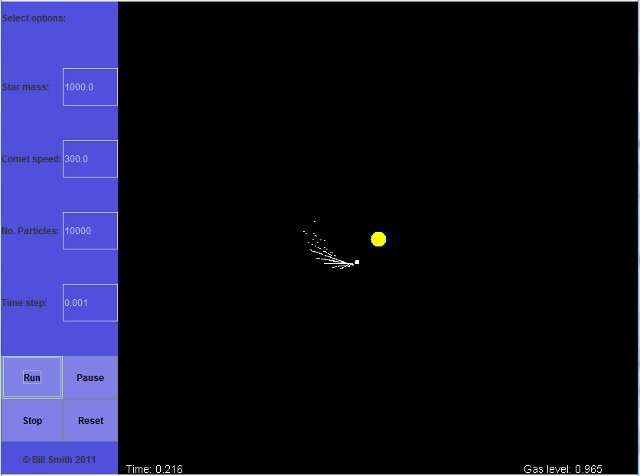 Tycho Brahe (1546-1601) was the first person to realise that comets moved through the solar system and were not phenomena confined to the Earth's atmosphere. However he did not know how they actually moved, only that they followed non-circular paths through space. His colleague (some would call him his assistant, though he was undoubtedly Tycho's mathematical superior) Johannes Kepler (1571-1630) agreed that comets travelled through the solar system and thought they followed straight lines. However it was Isaac Newton (1643-1727) who proved that comets were subject to the laws of gravity and showed that some famous comets of his era followed either extreme elliptical or near-parabolic orbits. His work was brought to completion by Edmund Halley (1656-1742) who calculated the periodic, elliptical orbits of many comets, most notably Halley's comet, which he correctly predicted would return again and again.

The program we show here demonstrates how comets move under the influence of gravity. Starting from a fixed distance from the sun, it follows a trajectory determined by its initial velocity. With the default values of the program, the comet follows an ellipse and you will see that the comet's original position corresponds to the aphelion (furthest point from the Sun), where its speed is least. At perihelion (closest point to the Sun) it travels fastest. At some point between these extremes, the comet warms and a tail develops. (Note: in this model, the tail is assumed to be composed of gas and dust. The alternative ion tail, caused by ionisation of the gases, is not represented.) The gas/dust particles are thrown off the comet nucleus with a random high speed and, once free, follow their own trajectories. The effect is a passable imitation of a comet.

You can experiment with the model by changing the initial speed of the comet and see how this affects the trajectory. You may also change the mass of the Sun to affect the time scale of the dynamics, but in this case be prepared to change the time step of the integration, as you may find the dynamics becomes unstable. To change any value appearing in a text box, Enter new numbers into the text boxes and press on your keyboard. (Do not leave the box blank!) You can have more or fewer gas particles in the model, which will affect the active life of the comet.

The control buttons of the model are as follows:
1. Run starts the model running;
2. Pause pauses the running model and restarts it when clicked again;
3. Reset restores everything to the initial values;
4. Stop stops the model running.
Some things to notice are:

1. Small values of initial speed give rise to elliptical orbits with the starting point representing aphelion.

2. The orbits get larger with increasing initial speed and this may prevent the comet getting close enough to the Sun to generate a tail. This suggests why some comets do not have tails, or perhaps very small tails.

3. The gas particles stream from the comet in a direction away from the Sun, driven by the solar wind.

4. Gas production starts and stops at the same distance from the Sun, but the tail is more conspicuous after it has passed perihelion.

6. Increasing the initial speed beyond a certain value makes the orbit elliptical again, but now the starting point represents perihelion.

7. Increase the starting speed too much and the ellipse become so large you cannot tell if the orbit is elliptical or parabolic. (A problem that occurs in practical astronomy also!)

8. The more orbits the comet makes, the lower its gas level becomes. Eventually the comet will become "extinct".