The Grand Tetons
The total eclipse of the Sun that took place on 21 August 2017 was exclusive to the United States of America. Its path between the Pacific and Atlantic oceans crossed no other country, so with some justification it was called 'The Great American Eclipse.' Along with my wife Celia and a troupe of amateur astronomers we assembled at the Snake River Ranch at the foot of the Grand Teton mountains in Wyoming to witness the spectacle. Our location had been well selected by John Mason, the famous British astronomer, so it afforded a wide and cloudless sky in a spectacular setting. 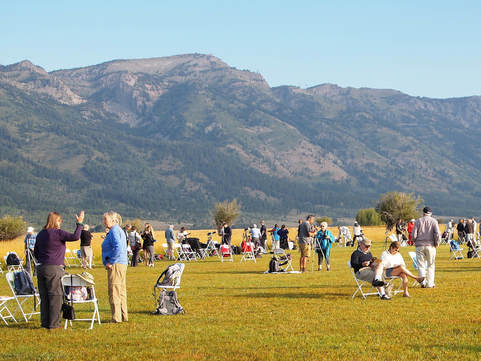 The Astronomers Assemble
Early morning I set up my tripod and my trusty Nikon D40 camera (a veteran of many eclipses and transits) with a 70-300mm zoom lens and solar filter and set the focus with the help of a number of sunspots that were prominent of the Sun's disk.  According to John Mason's lecture on the previous night, first contact was due at 10:16:39 and final contact at 13:00:18 (local time). Mid eclipse would occur at 11:35:55 and the whole event would be almost 2 hours and 44 minutes in duration. Everyone settled down to wait.... 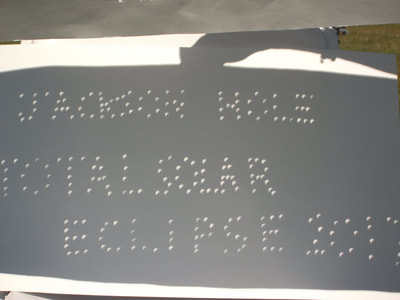 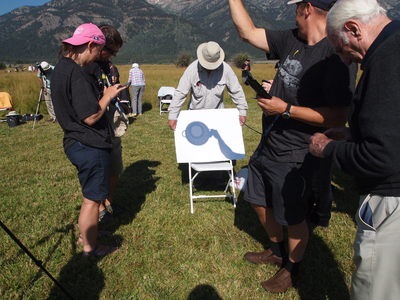 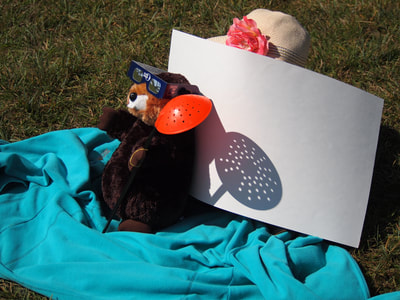 At the designated time, a cry of 'first contact!' went up and cameras began clicking. There was great excitement all around. I followed my planned procedure of capturing an image of the eclipse at regular five-minute intervals and between times gazed around to take in the environmental changes brought about by the eclipsing Sun. One thing that soon became very evident was a drastic fall in temperature and it wasn't long before I had to recollect my fleece jumper, which I'd discarded in the warm sunlight pre-eclipse. Gradually, as the light level diminished, a kind of half-light took over and remained until the eclipse was almost over. In the sky, just as I'd seen during my previous total eclipse in Cornwall in 1999, the birds began to desert then sky as they sought somewhere to roost. People began to do eclipse inspired experiments - in particular casting multiple Sun images with pin-holed cards. Almost as totality descended, a new cry arose: 'shadow bands!' and sure enough, on a white sheet of card laid out on the ground, flickering shadows could be seen. 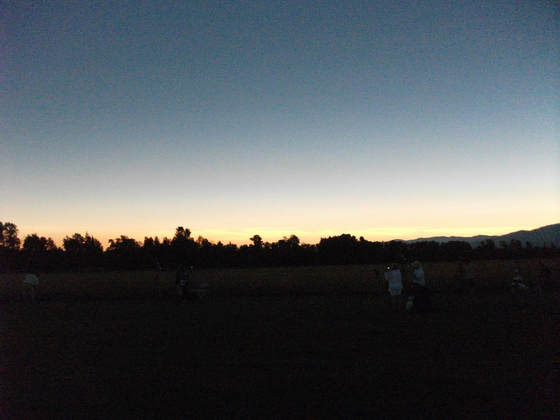 Mid Eclipse at Snake River Ranch
All this was just a prelude however. As the Moon slotted into place over the face of the Sun a collective gasp of amazement erupted from the onlookers. And who could blame them? A black hole had appeared in the sky, taking out the Sun and leaving it bleeding in a pool of white light. In that instant I understood the primitive fear of those born in unscientific ages, when the source of all light and warmth looked mortally wounded. In the freezing cold I shivered at the doomed light before returning to my photography. Then there came another collective gasp as the Sun morphed into a diamond ring followed by another cry of 'shadow bands!' which split the gloom and reminded us that this is, after all, a scientific age and we had observations to make.
Things were mildly anti-climactic after that. Sunlight was rapidly restored. Many people clapped and cheered and embraced whoever was closest.  For such folk, the eclipse was over, but not those of us who were keen top follow the whole event through to its astronomical end. I continued taking photographs, pausing only for a few hugs and handshakes of my own - until the Sun had emerged in its entirety. Despite the restored Sun, it remained cold for at least another 20 minutes.

At the end of it I had in my possession a suite of photographs capturing the eclipse in some detail. I had caught first contact and the progression of the moon across the Sun quite well. There were minor mess-ups when I detached and reattached the solar filter at the start and end of totality, meaning I missed the diamond ring at its best, but overall the results were quite pleasing. A few of the shots appear above and I also stacked the whole set in an animated GIF, which is presented below. It captures the event quite well I think. 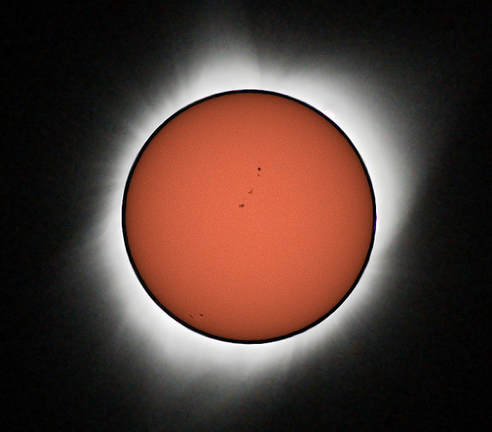 All that remains is to thank the people who helped to make the event such a success. The people we travelled with on the tour were certainly a big part of that. There were plenty of astro-photographers to talk to and share astronomy sessions. We were also delighted to meet again several fellow travellers from the 2012 Annular Eclipse Tour were at Snake River Ranch.  We were particularly pleased to have the company of Rosemarie Parks on the day of the eclipse. She is a kind lady, well travelled, and knowledgeable about many subjects. The people of the U.S.A. were everywhere welcoming and enthusiastic about our purpose, proud that a bus load of Brits would come all the way over the Atlantic to see their eclipse and their National Parks. John Mason gave invaluable advice to all on matters relating to the eclipse and fired us with his enthusiasm. Astronomy Tours / Intrepid organised all the travel and the trips to the National Parks under the guidance of Shane Boocock the tour guide and Yuri, a steely eyed missile man, who drove us for the entire 2,500 miles of the tour. Thanks all.