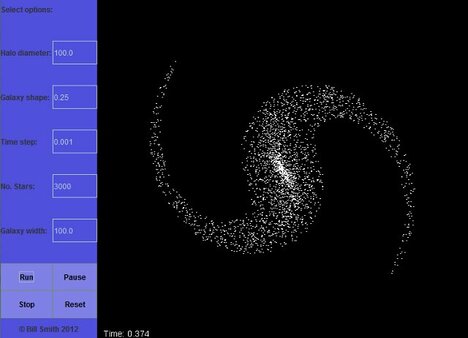 Spiral galaxies are among the most beautiful objects in the sky. Who could not be enthalled by galaxies like M101, the giant spiral, or M51, the whirlpool galaxy, or the magnificent  Andromeda galaxy, which is just visible to the naked eye? Great spirals are everywhere, like grains of sand on a cosmic beach. The structure is so commonplace that it is tempting to think they are easy to explain. The idea that they consist of billions of stars orbiting their common centre of gravity seems obvious, and surely those starts that are furthest out oribit the centre more slowly than those near the centre, just like the planets in the solare system. It is then easy to imagine how some shapeless group of stars may evolve under gravity's orchestration into the beautiful sprial we see so often.

But it is not as simple as it first appears. Astronomers using spectroscopy to measure the movements of stars in the galaxies find that they are moving too fast for the supposed mass of stars the galaxies contain. In short, if we relied on the visible stars alone, they would not have enough gravitational force to stop the galaxies flying apart! This is a great crisis in astronomy - either the theory of gravity is wrong, or there is far more matter in the galaxies than can be accounted for by direct observation. Modifed theories of gravity do exists and have their devotees, but most astronomers believe there exists vasts amount of so-called "Dark Matter" in the spaces between the stars, that adds its weight to the galaxies and restores accountability to their dynamics.

The Galaxy program we show here allows you to explore the basic feature of a dark matter model for a galaxy. In this model the stars are assumed to have negligible mass and move in a flat plane. Their motion is guided by an invisible spherical halo of dark matter, that accounts for most of the mass of the galaxy. The halo is not of uniform density; there is a higher density of dark matter near the centre of its sphere than there is near the outer extremities. The halo can enclose most or very few of the stars, according to your choice, but it always has control over the motions of the stars. Your task is to see what effect the halo has on the evolution of the galaxy.

You can experiment with the model by changing the values of the parameters in the text boxes. You can decide for yourself how many particles and ringlets there are and how wide the overall ring system ring is. You can choose the diameter of the halo in relation to the width of the original galaxy (which is fixed). You can also change the number of stars or alter the shape of the original galaxy with a "shape factor" between 0 and 1.  To change any value appearing in a text box, Enter new numbers into the text boxes and press Enter on your keyboard. (Do not leave any box blank.)

It is important to stress that this is not a very sophisticated model of a galaxy, there are many things it does not take into account, in particular the interactions between the stars. The individual motions of dark matter particles are not accounted for, not that we would be particularly interested in them! We simple assume the particles are there and that, in general, they cluster into a giant halo around the centre of the galaxy.  This what physicists call a "mean field" model. It is very simple, but it is nevertheless suggestive.

1. Note how easily the model forms "barred" spiral galaxies, the length of the bar increases with the width of the halo.

2. The width of the "arms" of the spiral are to some degree determined by the original shape of the galaxy.

3. The arms increase in length as the galaxy rotates, also the central bar gets shorter with time. Is this realistic?

5. In the bars the speed of the stars increases with distance from the galaxy centre.

6. In the more distant extremes of the arms, the speed of the stars decreases with distance from the centre.

7. In this model the galaxy always has a two-fold rotational symmetry, which comes from the original choice of galaxy shape.