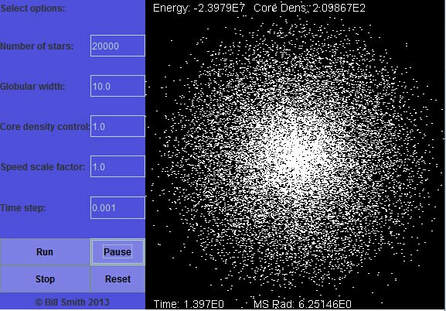 Globular clusters surround our galaxy in great numbers. Tightly packed collections of thousands or even millions of stars, they form spectacular spheres of light in the eyepiece of a telescope. Certainly, nobody who sees M13 in Hercules, Omega  Cenauri or 47 Toucanae  for the first time through a telescope can fail to be impressed. And if you are interested in gravity, one immediately begins to wonder how such clusters of stars persist in the heavens. What manner of strange dynamics moves the stars and what trajectories do they follow? Are the globular clusters static shapes in the sky or do they change over time?

The Globular program presented here offers a chance to "build" a globular cluster of your own! You can build a globule of some tens of thousands of "stars" and see how they collectively evolve in time. In reality this is a huge mathematical problem that cannot be solved analytically (without making some serious approximations). Even by purely numerical methods it is a challenge to do it efficiently.  But we can learn much from a simple model and we have adopted the simplest one possible. What this program does is construct a gravitational field based on the distribution of stars at an instant of time. Then we use this field to drive the motions of the individual stars. It is what mathematicans call a "mean field" model; the individual stars do not interact directly with each other, just the  mean field. This makes the whole calculation simple and efficient. We are of course neglecting the finer detail of the motion of each star,  but we hope that in an average sense, the global structure of the cluster will be faithfully reproduced.

The program allows you to set some parameters for the model: the number of stars and the diameter of the starting spherical cluster among them. There is also a way you can alter the density of stars in the centre of the initial cluster (which also alters the initial distribution throughout the cluster) and you can alter the initial speed of motion of the stars to see how the stability of the cluster is affected. Be prepared to let the program run for a long time - to see as much of the evolution as possible. These are, after all, huge structures which necessarily evolve slowly. Lastly, if you want to investigate the stability of the numerical procedures, you can try changing the time step and see what happens!

1. The clusters usually change a great deal right at the start, but it can settle down to one of three outcomes: An ever expanding sphere(!); a constant sphere; and a sphere that oscillates in diameter. The constant sphere is the rarest of these outcomes in this model.

2. The number of stars and the initial diameter of the cluster have a marked effect on the speed of evolution of the cluster. In general, the greater the cluster density, the faster things evolve. Also changing the density of the core at the start has a big effect, for much the same reason. Globules with the highest density of stars at the centre are most likely to behave violently - throwing stars around recklessly! This because the high
density generates strong gravitational forces. Experiment with these controls and see!

3. The initial velocity of the stars also affects the evolution markedly.This can make the cluster expand or contract rapidly! It is interesting to see how these two opposites play out. The outcomes are not as different as you might expect.

4. The globule is three dimensional, though the view is two dimensional. this affects the way the motion of the stars is seen. For example most apparent "collisons" are nothing of the sort. As in a real star cluster, stars almost always pass by each other at some distance. This is why we think neglecting interactions between individual stars is reasonable.

5. Collective motions are sometimes visible in the globule. The stars appear sometimes to form "rings" that pulsate in and out from the centre. These are real effects in as much as they are a consequence of how the model is set up, but are doubtful as phenomena in real clusters. There are disspative (friction) effects that are present (at least in the early evolution of real clusters), which probably dampen these collective motions.

6. You may notice, if you stare at the screen for long enough, that there is some "rocking" of the cluster from side to side. I am not sure if this is an optical illusion, but it may arise from the mean field approximation. The centre of the mean gravitational field does not necessarily coincide with the centre of mass of all the stars, so some lateral movement of the globule may result. It's a warning that models like this must be interpreted carefully.

7. The program prints the current system energy on-screen as it runs. This should be reasonably constant at all times (to within 1 percent or so) and should never become positive. If that happens it's a sign that the calculations have become unphysical. You may need to reduce the time step to prevent this happening.