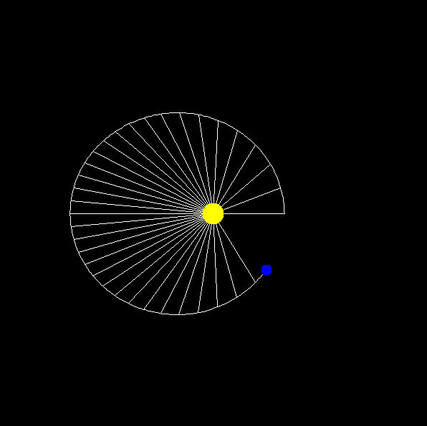 According to the famous astronomer and mathematician Johannes Kepler, the planets all move in elliptical orbits around the Sun with the Sun at one focus of the orbit ellipse. (Kepler's first law.) The motion of the planet is such that a line drawn from the Sun to the planet (the `radius vector') sweeps out equal areas in equal times. (Kepler's second law.) This means that when the planet is far from the Sun, the angle of rotation of the radius vector, in a fixed time interval, is less than when it is close. This can be clearly seen in the diagram above, where the radius vector is drawn at regular intervals during the orbit.
In Kepler's day, this represented the pinnacle of scientific achievement, but even Kepler did not realise that this discovery had a wider significance.

When the English scientist Isaac Newton later produced his great work, the Principia, he showed that the same law applies to other orbits around the sun, including hyperbolic and parabolic orbits, neither of which are closed like an ellipse. This can be seen in the parabolic orbit: 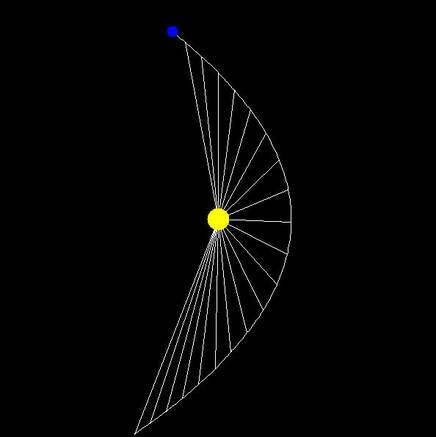 Newton's Parabolic Orbit
[Download Parabola.jar]
and in the hyperbolic orbit: 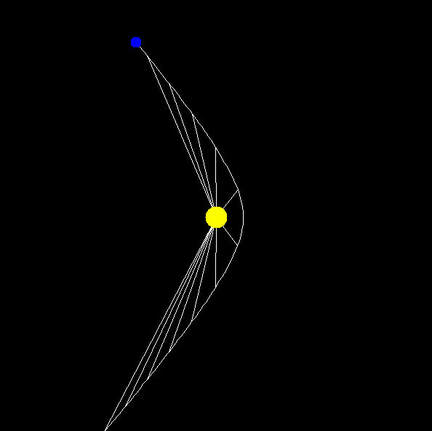 Newton's Hyperbolic Orbit
[Download Hyperbola.jar]
Parabolic and hyperbolic orbits are typical of comets, rather than planets. From Newton's theory of gravitation it is possible to work out what makes an orbit elliptical, parabolic or hyperbolic. It is in fact determined by the total energy of the orbiting object (planet or comet). The total energy is the sum of its negative gravitational potential energy and its positive kinetic energy. Objects in elliptical orbits have insufficient kinetic energy to overcome the gravitational attraction of the Sun and the total energy is always negative. The motion is therefore dominated by gravity and an object remains in a "captured" orbit that repeats endlessly, which is exactly the condition of the planets.

A parabolic orbit occurs when the kinetic energy of an object exactly compensates for the gravitational potential. They are equal in magnitude but opposite in sign, so the total energy of an object in a parabolic orbit is therefore always zero. This means the object has exactly the right amount of kinetic energy to escape the gravitational attraction of the Sun. In principle it has enough to escape to infinity(!) but if it ever got there, it would arrive with no kinetic energy left. It would simply rest there, immobile and exhausted! On the other hand, the hyperbolic orbit occurs when an object has more than enough energy to escape the gravitational attraction of the Sun. If it escaped to infinity it would still have enough energy to keep going! The total energy is thus always positive.

This behaviour of an object at infinity is of course idealised, what really happens is that the object just moves more and more slowly as it loses kinetic energy against the gravitational pull. So, far from the Sun's influence, where where the gravitational pull is too weak to be detected by all but the most delicate experiments, we would find that objects in parabolic orbits are hardly moving with respect to the Sun, while those in hyperbolic orbits are still flying away.

Interestingly, these results from Newton's theory tell us something about the origins of planets and comets. Planets are born relatively close to the Sun (in astronomical terms) so they feel the effects of the Sun's gravity markedly. The gravitational force confines the proto-planetary material (dust and gas) to closed orbits around the Sun, where they are able to congeal into planetary bodies, all the while remaining in orbit around the Sun (where they still are to this day!).

Much further out from the sun, its gravitational effects are less dominant and the material that exists out there collects slowly to form small bodies like comets. They are slowly moving compared to the planets and possess relatively little kinetic energy. Their distant orbits are easily perturbed by other bodies passing closely by and this sometimes sends them on a trajectory towards the Sun. Since they start so far from the Sun their orbits, though still formally elliptical are so stretched out that they are indistinguishable from parabolas when they pass close to the Sun. They appear therefore to have fallen from infinity! Sometimes they get deflected by the gravitation of the planets, particularly Jupiter, and when this happens they often lose energy to Jupiter and then continue on a new orbit, less energetic and less elliptical than before. They then become periodic comets, returning like Halley's comet at regular intervals. These are called short period comets and only require few decades or less to reappear. Sometimes the interaction results in the orbit becoming hyperbolic and the comets are flug out of the solar system forever! Without the intervention of the planets, a comet on a near parabolic orbit would return only after many thousands of years (so called long-period comets), while those on a truly parabolic orbit to begin with would never return. Near-parabolic orbits are by far the most common orbits for comets, which strongly suggests they are born distantly in our own solar system.

Do any comets have hyperbolic orbits to begin with? Yes, a few. This suggests that they are from beyond the gravitational influence of the Sun, possibly from the interstellar region, which is quite a thought! But it is also possible that they are solar system bodies flung on a hyperbolic trajectory by an encounter with a distant object, perhaps other comets or asteroids. The evidence for this comes from the fact that their energy is only slightly above zero.

How impressive is this? It's truly remarkable what we can learn by thinking through the consequences of the theories of Kepler and Newton.
Footnote: In the above diagrams, the orbits shown are generated by a numerical solution of Newton's laws of motion.