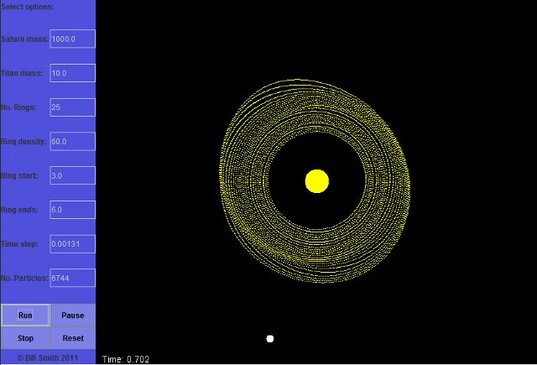 The rings of the planet Saturn are undoubtedly one of the great sights in the night sky. They were first observed by Galileo Galilei (1564-1642) through a small telescope, but were first recognised as a ring system by Christiaan Huygens (1629-1695), who also discovered Saturn's moon Titan. Since then powerful telescopes and space probes have shown the rings to be complex, delicate structures. Despite being 250,000 kilometres in diameter, they are only about  one kilometre thick! Their origin is uncertain and it is not known if they are permanent. It is evident however, that Saturn has many moons, starting with Titan, and these are potentially capable of perturbing the rings through their gravitational attraction. So are the rings stable?

The program presented here allows you to investigate what effects a large moon like Titan could have on a ring system like Saturn's if we played around with its mass. The ring system is constructed from a series of ringlets, each of which is composed of many "dust" particles.  You can experiment with the model by changing the values of the parameters in the text boxes. You can decide for yourself how many particles and ringlets there are and how wide the overall ring system is. You can also decide how much mass the moon ("Titan") should have, and then sit back and see what affect Titan's gravity has on the dynamics of the ring structure. Be prepared for some astonishing effects. To change any value appearing in a text box, Enter new numbers into the text boxes and press Enter on your keyboard. (Do not leave any box blank.)

The model has some limitations you should be aware of. It is assumed that the dust particles do not interact with each other, either by collision or through gravity. In reality both of these must occur, but for simplicty we assume the effects are negligible, at least on the time scale available to us in this model. This is probably the most serious omission. In reality what probably happens is not so different from what this model suggests. The general impression it gives is probably correct.

1. Warning - beware of a "stroboscopic" effect in the rings, which may problematic for some viewers.

2. A zero mass for the moon Titan has no effect on the ring structure, (no surprise there!), but even quite small values will, after a while, start to distort the circular motion of the ringlets.

4. Notice how the perturbation "runs ahead" of the orbiting moon and ask yourself why this should happen.

5. Ringlets closer to Saturn orbit faster than outer ones. (Best seen when the "ring density" is low.) This shows the rings aren't solid.

6. A large Titan mass will throw the rings into chaos, which does not apparently resolve itself back into an ordered state.

7. Particles "thrown out" of the system by Titan, often return again under the influence of  Saturn's gravity.

8. All of the above show that rings can only persist when perturbing effects are absent or weak. (One wonders how they ever formed in the first place!)

9. You should know that there is observational evidence that inter-particle interaction helps to stabilise  Saturn's rings. That effect is missing here.