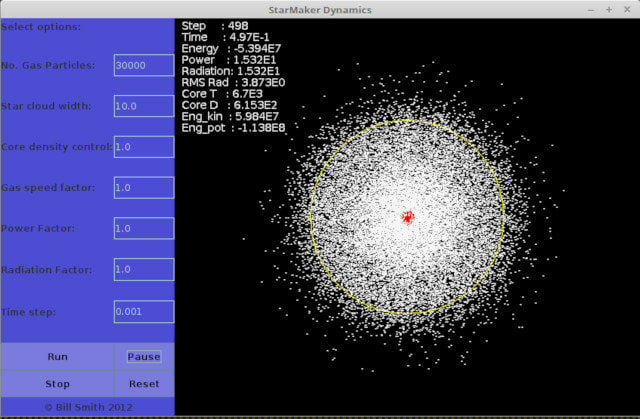 The internal workings of a star are complex, but its physical structure is a relatively simple thing. It is a gigantic ball of ionised gas (called plasma) that is confined by gravity, which pulls the mass of the star inwards. At the same time it is supported by internal pressure, which pushes the mass of the star outwards. The result is a dynamic balance which maintains the star at the observed size. The outward pressure arises from the temperature of the plasma and is the result of the nuclear fusion taking place in the core of the star. The energy from the fusion travels through the bulk of the star, maintaining its temperature and ultimately radiating away as heat, light and subatomic particles from the star's surface. As long as the fusion continues, the star will maintain its size and radiate is energy into space. A star's existence is thus a consequence of gravity, pressure and nuclear fusion. The most important of these however, is gravity. Gravity creates the initial conditions necessary for nuclear fusion to take place. It pulls gas inwards to create high density and thus pressure in the star's core and at the same time converts gravitational energy into kinetic energy, which is the source of the high temperature. Only when both pressure and temperature are high enough, does nuclear fusion take place. It would not happen without gravity.

The Star Maker program presented here provides an opportunity to explore the physics of stellar structure.  You can build a model "star" of your own, which shows behaviour found in real stars! It does this because it is dependant on the same basic ingredients: gravity, pressure and temperature, with a source of energy at its core, and a mechanism for removing this energy that is analogous to radiation. It is a spherical ball of gas made from tens of thousands of particles that move under the influence of their mutual gravitational attraction. A source of heat at the centre "switches on" when temperature and pressure are high enough and increases in output as temperature and pressure increase. At the same time a "thermostat" takes away the energy, to stop it growing without limit. The thermostat is thus the model's equivalent of the star radiating its energy away into space. With this simple model you can build a "proto-star" and see how it evolves in time! How stable will it be? How much power will it generate? Will it blow up? You will be able to find out.

The model we are using is very similar to the "Globular Cluster" model also found on this website. It is a "mean field" model - the individual gas particles do not interact directly with each other, but with the mean gravitational field of all of them. This makes the calculations simple and efficient. Despite this approximation, the behaviour of our model star should be quite realistic - but we must be wary of over-interpretation and part of the skill of using such a model is to develop a sense of its limitations and how they might affect what we see.  At the same time however, we can learn much about the internal dynamics of stars from what is a very simple model.

The Star Maker program allows you to set some parameters for the model:


To change any value appearing in a text box, enter new numbers into the text boxes and press Enter on your keyboard. (Do not leave the box blank!)

1. The yellow circle that appears on the screen is a measure of the star's diameter. Since a relatively small number of particles (30,000!) is used to represent an entire star, the surface of the star is ill defined. The circle represents  the root mean square radius of the star, which approximates to the star's size. Note also that when energy generation starts in the core of the star, a red disk, approximating the size of the nuclear fusion core appears at the centre of the star.

3. In normal use, the energy content of the star should be a negative constant number. Negative because it is a bound system and constant because the system is stable (though it may fluctuate a little because of the approximations used).  If however, the user sets the "radiation factor" to something different from 1.0, the energy should no longer be constant (though it may not change very much if the power generation is low.) If the radiation factor is 1.0 and the energy nevertheless changes, this implies that the program is numerically unstable and you should try a smaller time step. Usually however, the numerical instability follows from a physical instability in the star and the situation cannot be rescued.

4. The default settings should produce a stable star that persists for a very long time. You will find however, that changing the control parameters often results in unstable stars that quickly shed gas particles (or even blow up). This is common - in nature too stars can be short lived and unstable. One of your tasks could be to map out the sets of parameters that lead to long lived, stable stars - rather as the Herzprung-Russell diagram maps out the stability range of real stars.

5. You will surely notice that when the simulation starts, the star shows rapidly evolving internal structure. This is almost certainly due to the starting conditions, which are quite artificial. The system usually settles down quickly, though some unexpected effects may persist for a good while - such as pulsing of the star size. Increasing the core density control parameter at the start can help reduce this, but the effect doesn't really go away entirely. It is however a harmless effect and does not seem to destabilise the star.

6. One thing you should certainly try is setting the gas speed parameter to zero at the start. This means the initial gas is at zero temperature. The effect is quite dramatic and resembles a supernova explosion! Do not be deceived however. If you look at the final system energy it will be hugely positive, which is a sure indication that the algorithm modelling the particle motions has broken down (because the gravitational forces have become far too large). Th explosion happens even if the power generation is switched off. It's a warning that models like this must be interpreted carefully. Nevertheless the collapse of the star and the resulting explosion does reflect some real physics - it's just that the consequences are too violent for the program to model!

7. The StarMaker obviously does not model real stars. However, it does model a comparable system in which the key factors of gravity, temperature, pressure etc. show their influence. There are some lessons to be learned that relate to real stars.