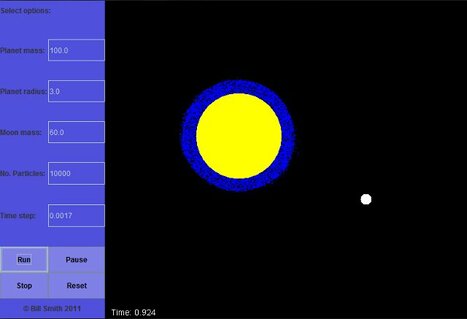 One of the remarkable things that Isaac Newton proved in his great book Principia was that the tides of the Earth's oceans arise from the effects of gravity. The principle agents responsible are the Moon and Sun. In crude terms, the gravity of these bodies pulls on the oceans facing them and raises the water a few metres above where it would be otherwise expected to lie. But the full phenomeon is actually more complicated than this. As the Earth orbits the Sun, the Moon orbits the Earth, which means the Earth also revolves around the centre of mass of the Earth-Moon system. As a result the Earth's oceans are affected by centrifugal forces which also cause the water to rise, but at a location on Earth opposite to where gravity raises it. The combined effects, coupled with the 24 hour rotation of the Earth about its polar axis, result in tides that rise and fall twice during the day at any particular place on Earth, by an amount that depends on the relative positions of the Sun and Moon. So it is not just gravity that influences the tides, it is also the dynamics of the Sun-Earth-Moon system.

The tides are not just a phenomenon that occur on Earth. They are universal. A spectacular example arises in stellar binary systems where a small star (perhaps a white dwarf) companioned with a larger star (perhaps a red giant) manages to draw material from the larger star by tidal action. In time this additional material accumulates and gives rise to an extremely violent stellar explosion. Type 1a supernovae are an extreme example of this phenomenon. So tidal effects are a key component of many important astronomical events. For that reason they are well worth learning about.

The TideMaker program is designed to let you explore the effects of tides in a simple planet-moon system. The planet has an ocean (modelled here as a sea of particles) that is bound to its surface by gravity. The moon orbiting the planet exerts a gravitational influence on the ocean and draws it upwards. The amount by which this happens is under your control, since you can alter the planet's mass and radius and the mass of the moon. With the default settings you should just about see the tide rise below the moon. But depending on what values you assign to the model, you may see more substantial effects. You may also alter the number of particles that make up the ocean. This won't change what happens, but perhaps make some things more easy to see. Or you can change the time step, if you are interested in testing the accuracy of the model (this is a geek option!).  To change any value appearing in a text box, enter new numbers into the text boxes and press Enter on your keyboard. (Do not leave the box blank!)

The control buttons of the model are simple:

1. Run starts the program running;
2. Pause pauses the running program and restarts it when clicked again;
3. Reset restores everything to the initial values;
4. Stop stops the program running.
There are some things you should know about the model. The particles making up the ocean do not interact with each other. They have no gravity of their own and exert no forces on each other. They are simply dynamic particles capable of responding to gravity. Real water molecules of course have strong chemical forces between them that makes water a liquid under earth-like conditions. Our ocean is a simple gas-like fluid, which is good enough to show basic tidal effects. Also the planet and moon are not considered to be "point objects"; they have width, which helps prevent infinite gravitational forces arising when particles get close to them. (They collide with the surface instead.) Also note the planet does not spin in this model. (Unlike the Earth.) Lastly, you should know that the tidal effects sometimes take a while to develop fully after the program starts running. Be patient and don't jump to conclusions! It sometimes helps to pause the program and look closely at the picture to check out what is happening. You can click the pause button again afterwards to continue the run.

1. A relatively large moon mass is required to raise a visible tide on the planet. On the Earth-Moon scale the tide is only a few metres and would be very hard to see from space. This does not mean there is no tide!

2. Note that the planet and moon revolve around the system centre of mass and their distances from the centre vary with the masses you choose.

4. Similarly increasing the planet's radius, weakens its pull on the ocean, this makes the ocean more responsive to the moon's gravity.

5. A "tidal bulge" on the side of the planet facing the moon is quite easy to see. Less obvious is a bulge opposite to this, which is due to centrifugal effects of the orbiting planet-moon system. You can make this more apparent by experimenting with the relative masses of the moon and planet.

6. If the moon succeeds in drawing off the ocean from the planet, note how some of it (the parts that don't simply collide with the surface and vanish) goes into orbit around the moon. This disc of particles is known as an "accretion disc". (You should be thinking about supernovae at this point!)