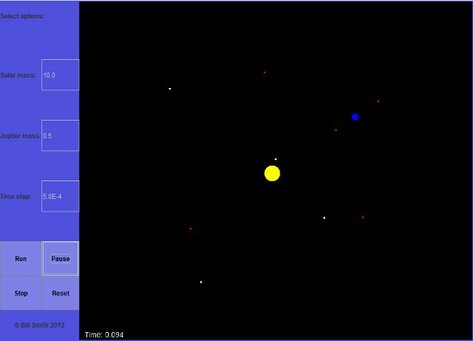 The Trojans are a group of asteroids that travel around the sun in the same orbit as the planet Jupiter. Some travel 60 degrees in advance of the planet and some 60 degrees behind. These seem precarious places to be and it is easy to imagine that the gravity of Jupiter would manage eventually to pull them onto a collision course with the largest of the planets. But this does not happen. It turns out that the combined gravitational attraction of the asteroids by the Sun and Jupiter results in a net gravitational force that is directed toward the centre of mass of the Sun-Jupiter system (about which both bodies move) and this net force is exactly the right strength to hold the asteroid in orbit around the central point. So the Trojan asteroids are in locations of dynamical balance, which is why no collision takes place. If we imagine the two triangles defined by the Sun, Jupiter and the Trojans, we find that they are equilateral triangles, and these turn around their common centre of mass with the orbital periodicity of Jupiter. (Some wag has even named the two sets of asteroids Trojans and Greeks. The Trojans chase the Greeks endlessly around the Sun. Some wars are eternal it seems.)

But there is more to this. Gravitational systems containing three bodies (or more) are notoriously difficult to solve analytically. But in cases where two of the bodies are massive and one is negligible, specific solutions can be be found. The eminent French-Italian mathematician Joseph-Louis Lagarange (1736-1813) showed that for this restricted problem, there are in fact five points of the kind exemplified by the Trojan asteroids. These are now called Lagrange points L1 to L5, and the Trojans occupy points L4 and L5. L4 is ahead of Jupiter in its orbit and L5 is behind. Points L1 to L3, which were also independently discovered by Swiss mathematician Leonhard Euler (1707-1783), all lie along the straight line connecting the Sun and Jupiter. L1 is between the Sun and Jupiter; L2 is on the far side of Jupiter, away from the Sun, and L3 is on the far side of the Sun, away from Jupiter.

The Trojan program is designed to let you explore the Lagrange points of a model Sun-Jupiter system. You can vary the masses of the Sun and Jupiter, to see where the corresponding Lagrange points for different systems lie. The system is set up in dynamical balance to begin with and you can see how the pattern of (red) asteroids is maintained as we calculate the subsequent dynamics of the system. A few random (white) asteroids are also added, with the same initial angular velocity as the Trojans, to show that they follow quite different trajectories! You are encouraged to make small changes to the integration time step occasionally, to see how this affects the stability of the arrangement of asteroids.

Note that in this model the asteroids do not interact with each other, but they do feel the gravity of the Sun and Jupiter. Also Jupiter and the Sun are not treated as "point objects"; they have width, which helps prevent infinite gravitational forces arising when asteroids get close to them. They collide with the surface instead.

1. The (red) asteroids at the Lagrange points hold their relative arrangement as the system revolves.

2. The (white) asteroids, placed at random locations, do not hold the same relative position with respect to the Sun and Jupiter, though they may linger a little longer when close to a Lagrange point.

4. Accurate integration is required to maintain the arrangement for long periods, so small time steps are best.

5. The Lagrange points are not stable to small perturbations (such as arise with inaccurate integration). In this regard some of the points are more easily disturbed than others.

6. Similar Lagrange points exist for other combinations of the Sun and planets. Occasionally, asteroids are reported in the L4 or L5 positions of other planets, including the Earth.

7. The Lagrange points are plausible sites for astronomical satellites. For instance the points L4 and L5 would be good for stereographic observations of the Sun. (Though the Stereo spacecraft did not take this option.)