At the time of this eclipse I was fortunate to be in Bryce Canyon, Utah, in the American south-west. Those who know Bryce Canyon will appreciate that there are few places on Earth as ideal or exotic for observing such an event (see photograph). The Grand Canyon to the south undoubtedly has more grandeur, but Bryce surely has more wonder. Bryce is also a popular place for astronomers, on account of its exceptional "seeing", made possible by its high altitude (2,500 metres plus) and a total absence of light pollution. So it was no surprise on the day that the rim of the canyon was crowded with many thousands of observers. Every possible way of observing the event had been brought: eclipse glasses; binoculars (with Baader solar film); movie cameras; solar telescopes; SLR cameras with every possible lens, and even pinhole cameras! My own setup was a digital SLR camera on a tripod with a 70-300 mm zoom lens and a metal-on-glass solar filter. 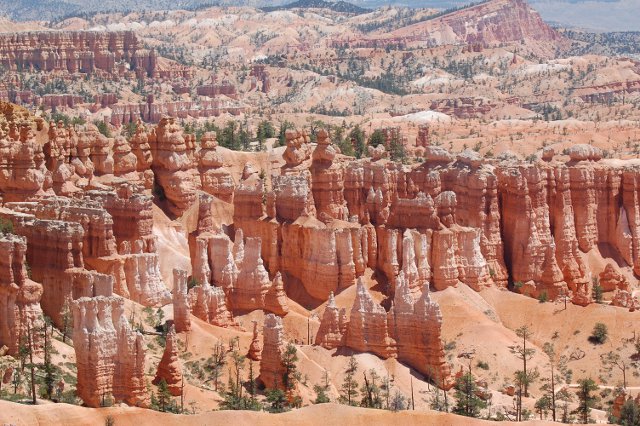 Bryce Canyon, Utah
The annular eclipse took place on the bright, sunlit evening of 20th May. Our precise location was Bryce Point, which is just north of the central line of the eclipse, so we were expecting the moon to pass slightly off the centre of the sun. It was due to start at 6:23 pm local time and reach maximum at 7:33 pm. We would not see the eclipse end, on account of the sun setting, but we would have a spectacular, unrestricted view of the rest, so we were full of anticipation. With my wife Celia and a group of fellow amateur astronomers on an "astro-tour" of the American south-west, I set up my equipment on the rim above an amphitheatre of coloured, spindly "hoo-doos" that stood attendant below.

On cue, the moon made contact with the sun at 6:23 and a cheer rose from the multitudes watching. Along with everyone else I began to take photographs, pausing on occasion to look at the event through solar filtered binoculars. Three clear sunspots were visible on the sun's surface and as the moon slid across the photosphere, they were all eventually eclipsed. It was a fascinating sight without doubt, but I think I was as much impressed with the idea that such an event could have been predicted with such precision. We take such capabilities for granted now, but it is a hallmark for what science has achieved.

At second contact, strange effects could be seen at the point where the edges of the sun and moon touched. These, we now know, arise from the roughness of the moon's edge - the lunar mountains breaking the spherical surface of the moon. It is these that give rise to the "diamond ring" effects seen during total eclipses, but on this occasion they gave rise to a kind of shimmering curtain of shadow running away from the point of contact - fascinating! At the point of maximum eclipse (or maximum annularity, if you prefer) the shadow of the moon was surrounded by a ring of light - the so called "ring of fire" that is the defining characteristic of annular eclipses. Despite being some way off the central eclipse line, it was not very obvious that moon was not central on the sun's disc.

The eclipse maximum lasted for about four minutes and ten seconds, before third contact occurred. The shimmering effect at the contact point was observed again for a while and then the moon began to move off the sun's disc. That was not quite it however, because the sun was still above the horizon and the moon had some way to go to fourth contact. Nevertheless, most people, myself included, began to disassemble our equipment and trudge back to the bus. This was a mistake however and those more persistent (or astute) waited to capture the setting sun, still in partial eclipse, descend into the tree-lined horizon - a view that begged to be photographed, and quite possibly the best shot of the day. I watched it happen with my kit tightly packed away! That aside however, I was content with the shots I had taken. (See examples below.)
In all I took 102 photographs during the eclipse (remember when film cameras were restricted to 36 exposures?). Too many to show here, so I gathered a selection of them into an animated GIF and present them below. It's a little jerky on account of the shots not being taken at regular time intervals (plus some editing effects), but the result is watchable and gives some flavour of what it was like.

Our Bryce adventure also happily coincided with the Bryce Canyon 12th Annual Astronomy Festival which took place in the Bryce National Park the day before the eclipse. Under crystal clear skies, quite unlike anything we were used to back in the United Kingdom, we had opportunity to look through many of the telescopes that had been set out by enthusiastic amateurs. Saturn and Mars made a good show, so did the Leo galaxy triplet (M65, M66 and NGC 3628), the whirlpool galaxy (M51), the sombrero galaxy (M104) and the Hercules globular cluster (M13) - all very spectacular in the pristine sky. It was good to see how well quite common astronomical telescopes deliver when given the best seeing conditions. Thanks to everyone who set up and took part in this event, it was a real treat.