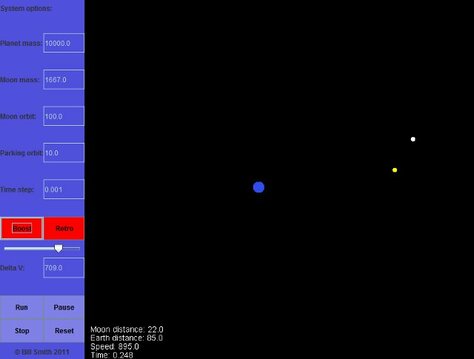 Those of us old enough to remember 1969 cannot forget it was the year when the USA put Neil Armstrong and "Buzz" Aldrin on the Moon. That was, without doubt, the USA's greatest technical achievement up to that point and a milestone in the progress of the human race. But aside from the technical brilliance and the courage and skill of the astronauts, I was also fascinated the journey itself. Once Apollo 11 was placed in Earth orbit by the mighty Saturn 5 rocket, the spacecraft broke out of orbit and headed for the Moon. On arrival at the Moon, Apollo 11 entered an orbit around the Moon. From there a controlled descent took the Lunar Excursion Module down to the surface. For most of this journey, the flight of the spacecraft was ballistic - it followed a path determined by its velocity and the gravitational field of the Earth and Moon. Only when it left Earth orbit or entered Moon orbit was any rocket power needed. Power was required in short bursts only and timing was crucial.

In homage to the Apollo missions and in keeping with the theme of gravity, I have devised a little computer game. It starts with an Apollo spacecraft in Earth orbit and by firing booster or retro rockets, you are required to take it on a trajectory to the Moon and place it in orbit around the Moon. How hard can it be? And if you succeed, try bring it back from the Moon to enter Earth orbit.

You have limited controls. The "Boost" button gives the spacecraft an impulse change in its velocity (called Delta V, but astronauts), which acts in the direction the craft is heading. The "Retro" button does the opposite, changing the velocity by an impulse in a direction opposite to the direction of travel. Note that neither button fires the rocket motors continuously, so if you want bigger changes, click the button more than once. The magnitude of the impulse in either case is governed by the  slider on the control panel. You can use this to fine tune the impulse you give the spacecraft. That's all you have to control your trajectory. Good Luck!

If you find the game too easy. You can change some of the characteristics of the simulation by altering the parameters in the text boxes. You can alter the mass of the Earth or the Moon, the Earth-Moon distance, or the size of the parking orbit around the Earth. Change the time step in the numerical integration to something less if you suspect that the accuracy of the simulation is getting poor. Otherwise there's no fun to be had in changing it. To change the number in a text box simply replace what's there and hit Enter on your keyboard. (Do not leave a text box blank, always put a number there.)