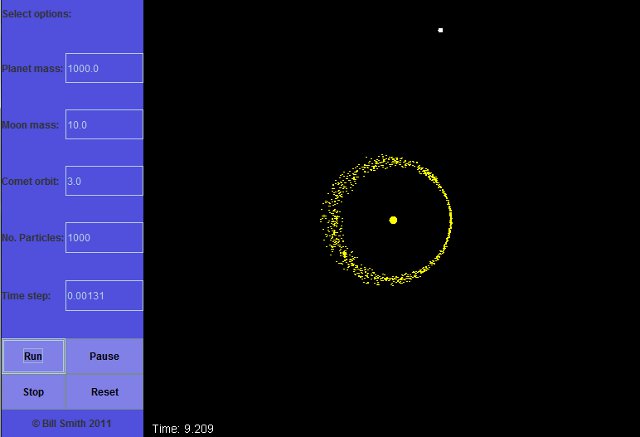 How do rings like those around Saturn form? A plausible suggestion is that they are formed when an unstable object - a moon, comet or asteroid - comes too close to the planet and is broken up by the planet's gravity.

This program allows you to explore this idea. It consists of a planet, which is orbited by a moon and a comet. The comet is unstable and fractures into a large number of pieces. Thereafter the liberated particles follow their own trajectories under the influence of the masses of the planet and the moon. (In this model, we assume the particles do not interact with each other, though in reality they might.)  You can experiment with the model by changing the values of the parameters in the text boxes. You can change the mass the planet or the moon, the position of the comet's orbit (up to a maximum set by the moon's orbit), and the number of particles the comet fractures into.  To change any value appearing in a text box, enter new numbers into the text boxes and press Enter on your keyboard. (Do not leave a box blank.)

1. It is easy to form a planetary ring in this way, but hard to form a "tidy" symmetrical one like Saturn's!

2. Ring "closure" happens when the fastest moving particles "catch up" with the slowest moving as they orbit.

3. Once the fast particles catch up, ring closure may only be momentary, since they fast and slow particles are in different orbits.

4. The influence of the moon is to distort or even disrupt the ring, it does not help make it more symmetrical.

5. It seems likely that other effects are needed to explain symmetrical rings like Saturn's. Like inter-particle interaction perhaps?