How Stable is the Solar System? 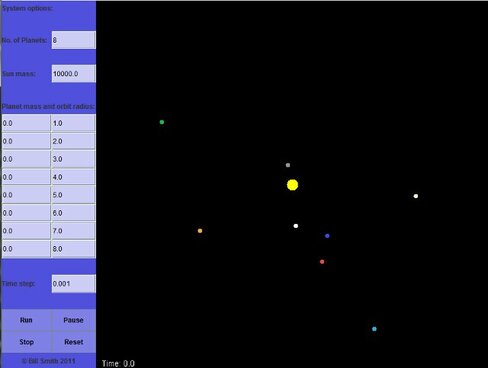 Copernicus and Kepler both believed the solar system was everlasting and the planets would move in their orbits forever, driven along their paths by some unknown agent. Newton had similar beliefs and proved mathematically that the unknown agent was gravity: the planets were held in their orbits by the gravitational force exerted by the Sun. In the absence of any other influence they would continue in the same orbits forever. But Newton also discovered that gravitation was universal, which meant that the planets also pulled on each other and their motion was not solely influenced the Sun. So the question arose - is the solar system stable if these "perturbation effects" are taken into account? The answer appears to be yes, but we are fortunate in that the inter-planetary forces are minute compared to the pull of the Sun. Newton thought this was divine providence, an idea that is unfashionable today.

Just how fortunate we are in our solar system can be leaned from models like the one here. The model is a numerical simulation of a solar system like our own and is based on Newton's gravitational theory and his "laws of motion". In the model the planets are set up to travel around the Sun in circular orbits. You can choose the radius of the orbit of any planet (within the range 1 to 25 units) and assign any mass to each planet. Using the basic settings, in which the planetary masses are zero, you will find that the orbits are indeed stable. But try the model with non-zero masses and see what happens!

The control buttons of the model are simple:
1. Run starts the model running;
2. Pause pauses the running model and restarts it when clicked again;
3. Reset restores everything to the initial values;
4. Stop stops the model running.
You may change the mass of the Sun, or the time step (which is used in the numerical integration of Newton's equations of motion) if you want to, but this is not recommended. Changing these will have an effect on the numerical stability of the integration, which will show up as wild motions. The option is there for those who want to see how much numerical stability matters in an integration scheme.

You may also change the number of planets to less than 8 if you find 8 planets too complicated to follow!

Some things to notice are:
1. Small planetary masses have very little effect on the original orbits.

2. As the planetary masses increase the circular orbits become less and less circular. The motion is increasingly more chaotic.

3. A large mass planet will tend to "throw" other planets around.

4. Planets apparently "thrown out" of the solar system often make a surprise reappearance!

5. As the planet masses increase, the Sun itself begins to show motion around the solar system centre of mass. (This "stellar wobble" provides the basis for detection of extrasolar planets.)